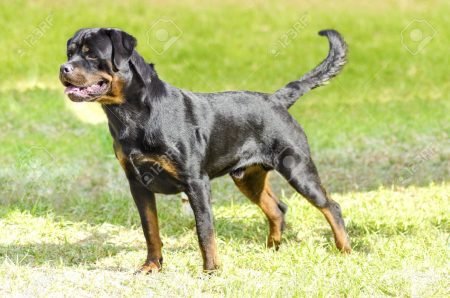 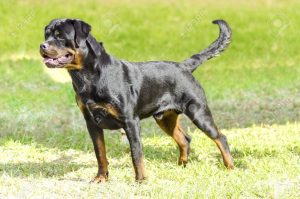 Question: When a dog wags its tail, does it mean the dog is:

Answer:  It depends!  It could be any of the above (and more) depending on the style of the wag and the rest of the dog’s body language.

Most of us think that a wagging tail = a happy dog.  And in many cases, that may be true.  But there’s soooo much more to tail wagging.  So, we bring you “Wag-ipedia” – your guide to tails, wagging and what it all means!

The key things to look at are:

Be sure you look at all these elements and the context to understand what your dog is signalling.  “Dogs are a ‘nonverbal species’ so – barking aside – they rely mostly on body language to ‘talk’ to us and to other animals.  As such they use many parts of their body – eyes, ears, lips, musculature and of course, tail – to communicate.  Watch any dog for a period of time and you’ll see there’s no such thing as a uniform tail wag.”  (Pet Professional Guild Education, Handout #2)

Think of tail height a bit like an emotional barometer!  At the two extremes – ie a tail held very low or very high – there’s cause for concern.  The sweet spot is (roughly) in the middle ie a tail held at mid height in a nice, lolloping wag like the Collie in picture 4.  Think of your typical Labrador wiggly wag!  However, the speed of the wag and the width of the wag-arc are important too.   Take a look at these positions and see if you can guess what the dog is signalling:

A dog with its tail held out can indicate the dog is weighing up the situation but not entirely comfortable with it.  Notice that the Rottweiler and the black and white dog have their weight forward, ready to make a move.  By contrast look at picture 3; this poor dog has its tail held very low, tucked between its legs, its head dipped, ears low and a furrowed brow – all clear signals that the dog is unhappy or scared (or unwell).  Click here to watch Helen Eade’s fabulous video showing you 2 very different types of tail wags and what they mean.

But what about a tail held very high, and wagging rapidly, almost as though its vibrating?  We sometimes miss this but it’s an important one to notice.  Particularly if accompanied by some posturing and tense body and face, like this dog here.  This dog is clearly warning that he’s ready to take action – in this case a ‘fight’ response rather than ‘flight’ response.  Beware!   Research has shown that when a dog sees someone they like, the tail wags more to the right.  While with an unfamiliar person, the tail wags more to the left. Subtle body language like this is easy to miss!

As well as indicating mood, a dog’s tail has another vital function: disseminating scent!  The most potent source of scent is the dog’s anal glands – that’s why dogs love a good bottom sniff!  It’s their most efficient way of finding out information about each other’s mood, age, health and much more besides.  Dogs use their tails to whaft scent and transmit messages to each other.  Interestingly, a dog will choose whether or not to advertise its presence to other dogs simply by changing the position of its tail, clever eh?  This is why a scared dog will often have its tail held very low, almost under its body like in picture 3 above.  It’s the dog’s way of keeping his scent to himself ie keeping a low profile.   By contrast, a higher tail wag enables a dog to whaft out lots of scent information.  Almost makes you wish you had a tail doesn’t it?

Stanley Coren  looked into the effect of tail docking upon canine communication; he even used robot dog to test reactions to short (docked tails) versus long (normal) tails.  He found that docked dogs “are at a disadvantage when interacting with other canines”.  A docked tail significantly reduces a dog’s ability to communicate: because a docked dog can’t offer the range of wags a normal tail can … which inhibits the receiver’s ability, ie the other dog’s ability, to ‘read’ what the docked dog is communicating.

A Final Tip On T 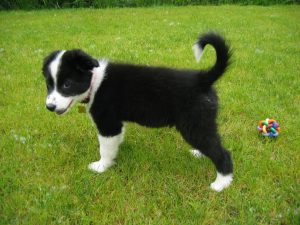 Have you ever noticed that some dogs have a lighter tip at the top of their tail or a lighter underside to their tail?  Ever wondered why?    It may be because it accentuates tail movement so can enhance canine communication.  Clever huh?

Disclaimer:  Canine communication is a complex and fascinating subject.  This article is intended as a quick peak into some common body language signals.  However, all tail positions should be ‘read’ relative to the average position for the breed of dog and looked at in conjunction with what the rest of the dog’s body is doing.

This article is also featured on the Dog Friendly Cotswolds website.