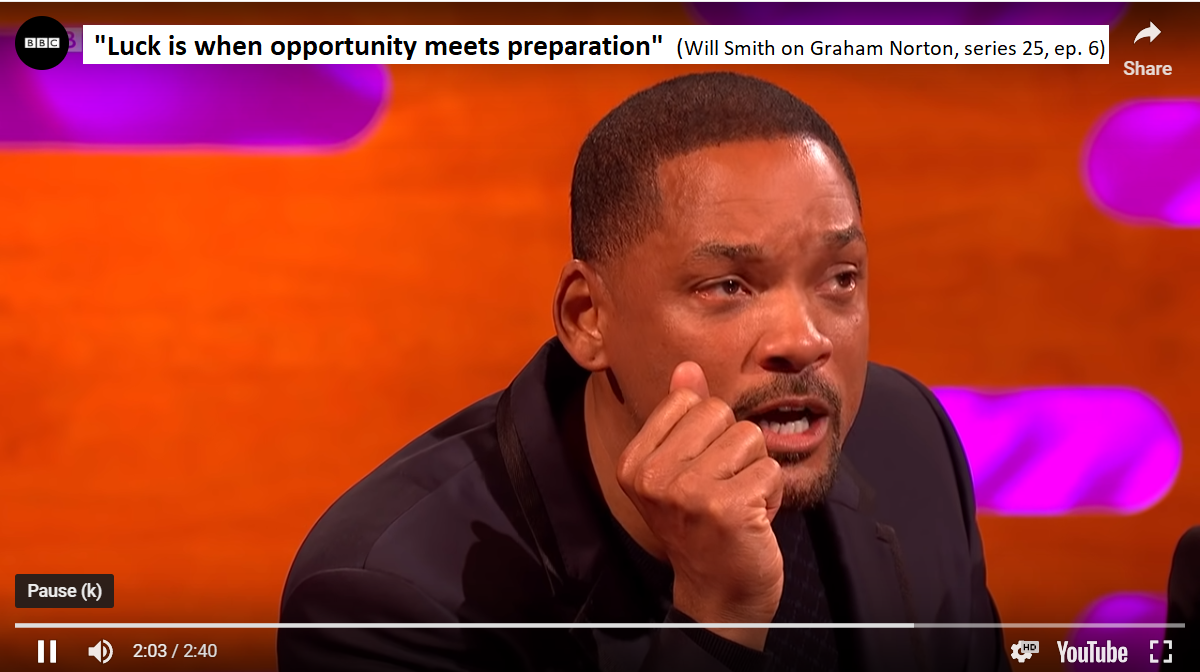 I was watching Graham Norton the other week and delighted that Will Smith was on (love that man!)  Mr Smith told various anecdotes, in his inimitable style but the one that lodged in my head was this:

“Luck? There’s no such thing as ‘luck’. Luck is when opportunity meets preparation”  Here’s the clip, scroll to 1 min 50 secs

I was working with a client recently whose young dog jumped up (a lot!) at people and on other dogs.  We did a couple of training sessions working on timing, placement of food, space management, and getting a better (longer, padded) lead that was easier for her to manage.  Additionally, I advised her to speak less and instead focus on giving clearer body signals to her dog.  For example, I suggested that when my client sees a person coming towards her dog she does 3 things:

Prepare: Move off the path if possible and give the dog (let’s called her Fluffy) more space from the ‘distraction’.

Park: Put Fluffy ‘into park’ ie put the lead under the Handler’s foot so Fluffy has enough slack to sit, down or stand but not enough to jump up, then …

Season: Start ‘seasoning’ the ground with little pieces of food, make being ‘in park’ pleasant and give Fluffy a task to do to help her cope with the stranger walking by.  Fluffy can still see, smell, hear the person going by, but they are no longer the main event. In the nicest possible way, we de-value the stranger and increase the value of Fluffy doing a more useful activity.

My client described our third session as ‘fantastic’ because we passed lots of people (and dogs, children, bikes, scooters!) and each time, Fluffy chose to keep her paws (and nose!) on the ground as she snuffled for treats.  My client was astonished at how ‘lucky’ we’d been.  I’d like to think it was more that she did a wonderful job of preparing, managing the environment and actively training so that she – and Fluffy – made the most of each opportunity.