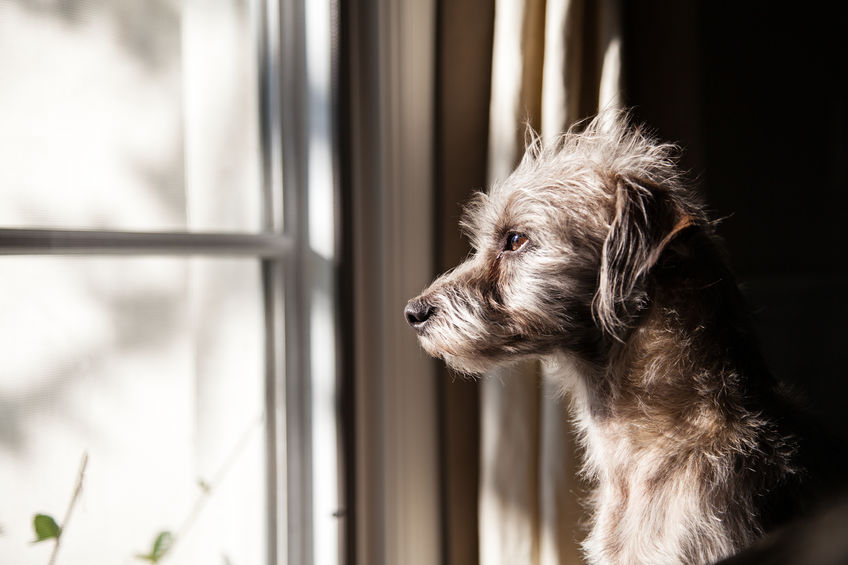 How does your dog cope being left alone?

Canine separation anxiety is now widely recognised. If you’ve been through this with your own dog or know someone who has, you’ll understand how emotionally draining it is for both dog and human. Seeing any animal in distress is heart breaking and, for the human, life seems to shrink as going out feels impossible.  I’m sharing my experience – to show that it can happen to anyone and more importantly to give hope that a solid training plan, working with a supportive Trainer, as well as lots of patience … and sausages! … can help your dog become happy home-alone.

Our dog came from a shelter.  He didn’t have a name – he was just ‘pup’. No-one knew his date of birth but we reckoned he was somewhere between 3 & 6 months old.  Gerry was anxious of lots of things: men, children, noises, movement, being touched particularly near his head, and of course being left alone.  For the purpose of this article though let’s focus on how we tackled the Separation Anxiety.

The tactics we used may not ‘work’ with every dog, after all each is an individual but I hope the above gives you comfort that you’re not alone on this journey. And that success is possible – for us that meant Gerry can be left, relaxed and content home alone.